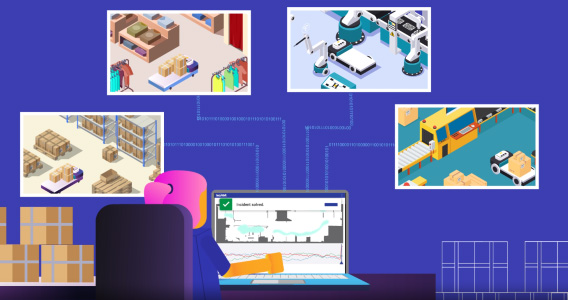 The world of mobile robotics, especially in the supply chain/warehousing world, is abuzz with discussions of “interoperability.” Let us define this (unwieldy, 8-syllable) term generally as the notion that different types of robots should be able to operate in the same physical space without getting in each other’s way, even if they come from different manufacturers. This will require some means of coordination, either through a central authority which knows where all the robots are and orchestrates their movements, or perhaps via a set of protocols by which the robots, in a swarm-like manner, communicate directly with each other to avoid getting tangled up.

In one respect, it seems there shouldn’t be much of an argument surrounding the topic. Standards need to be evolved, agreed on, and adopted by some decisive coalition of robot manufacturers, and then used to control heterogeneous robot fleets sharing operating space. And from a higher perspective, over the long run, this is undoubtedly what will happen.

But current discussions of interoperability often turn contentious, and in such a way that makes it easy to (mis)characterize the struggle as between the forces of change trying to bring harmony to a chaotic proliferation of company-by-company standards, versus incumbent robot manufacturers who are jealously guarding their territories against the interlopers who might take advantage of a brave new world of common communication standards to grab some of their current market share.

I believe that there is more to the interoperability discussion than this caricature would indicate, and the present white paper is an attempt to move the discourse in a productive direction, with input from both the user community (warehouse owners, enterprise-level customers, 3PL’s, etc.); software companies, like ours, who design fleet management algorithms; and robot manufacturers, without whose expertise any such venture is doomed to failure.

I will now attempt to lay out the opposing sides of this debate under the labels “replacement” vs. “semantics,” explaining what each of these means and why they each have a respectable amount of truth in their world views. In the end, I think that matters are more complex than we might think at first sight, due mainly in fact to the specific advantages of modern mobile robots: namely, their superior adaptability and intelligence.

On the first side is the idea that what we need is a common method of communicating with mobile robots, determining their status (functional vs. broken down, current position, pose, battery charge level, and so on), and then issuing them commands as to where to go next and what to do once they get there. For instance:

The list of commands that we would want to issue can have a parsimonious base — rotate, go forward, wait for a signal that the current operation is complete — to which can be added special commands for different general robot types. Kiva-style AMRs can pick up a tower of items and lower it back to the ground. Collaborating picking robots (cobots) go to an aisle and wait for human pickers to put items into their totes, then go off to the packing and shipping stations. Cleaning robots clean the area they are currently in, using whatever specialized equipment they come with. AS/RS systems move their shuttles around their densely-packed storage cubes and then, using elevators, tall robots, or some combination of the two, deliver the goods back to ground level to be taken off for packing and shipping.

Under this simplified view of the world, when designing algorithms for warehouse flows we can create general schemes for different categories of robots that are independent of the brand of robots being used. In theory, that is, we could swap out one manufacturer’s cobot for another’s without changing the overall orchestration scheme.

The advantages of such an arrangement for customers are obvious. Right now, a warehouse owner contemplating automation via mobile robots is being told how much more modern and sophisticated and flexible robots are, as compared to the large fixed-asset automation of yore, where long sorters, conveyors and the like stretched across the warehouse, and if you wanted to change to another scheme you had to essentially throw everything away and start over.

So the warehouse owner gets excited about mobile robots, until perhaps they are told that once they select a robot vendor, they can only use that vendor’s software to orchestrate the robots, they have no visibility into that software, and if they want to change to another provider they have to start all over again. Their flexible solutions turns out to be rather rigid once it’s installed. (Economists call this a “lock-in” effect, and it reduces market activity by making users more leery of making the initial investments needed to adopt the new technology.)

By contrast, replaceable robots would shift power back to the customers’ hands. If, for instance, a robot vendor’s promised levels of improved productivity prove difficult to attain, the user could try another supplier’s product without completely rewriting their fleet orchestration software. This observation has led, in turn, to the characterization of the interoperability debate as simply a power struggle between robot suppliers and users. But there is more to it: even allowing for the presence of competing interests over standards, the technical issues are more subtle than that.

The Replacement vision above treats robots as points on a grid (or 3-D lattice) that move and take actions according to the instructions given to them by their fleet management system. If that were an accurate description of reality, then standards evolution would probably have traveled a much smoother path than it has to date.

But, of course, modern AMRs don’t just respond to external commands. They are agile and intelligent: they can inspect their environment through a variety of sensors and act on the information gathered. They can maneuver around fixed obstacles, wait until an intersection is clear before attempting to move through it, look at a pallet and remove the top box, and so on. That’s their raison d’etre: they are smart enough to need only minimal guidance to get their work done.

This poses a challenge to the Replacement theory on two levels. Externally, given that each manufacturer has its own system of sensors and software to control its robots’ movement, it is extremely unlikely that you could swap out one brand of AMR for another and get the exact same performance. Some will move faster; others, slower. Some will wait until there are no visible obstacles within the next 10 feet on its path; others may lower this threshold. Some will take different arc paths to turn corners. And so on — the algorithms controlling a certain type of robot would at least have to have their parameters tweaked when trying to substitute in another brand of robot.

Internally, we encounter a possibly even more daunting challenge coming from the fact that different robot types see the world around them differently. That is, they each have their own vocabulary, or semantics, to describe their environments. Some may see a border as no more than a software command not to try to enter a certain area. Others may know that, in fact, the border is a wall, and if they stray too close they might collide with it. Still others may know that this is a wall with an emergency exit door in it, and if an alarm goes off in the warehouse they must not block this door.

Almost every item in a warehouse, moving or stationary, is subject to the same variety of cognitive possibilities. Do the robots sense different racks full of inventory? Can some of them interpret signals sent from a box identifying its contents? If a robot is moving a kiosk to a picking station, does it know on which side of the kiosk a certain inventory item is located? Crucially, can a robot inspect a moving object and know that it is a human, rather than another robot?

In short, the Semantic proponents argue, until we can harmonize the elements of a robot’s worldview, we cannot make much progress towards a series of standards upon which to base general fleet control software. Some will have a rich vocabulary, some a more limited one, and it’s a Procrustean task to try to bring them all together; we will either chop off some of the more sophisticated concepts for the more complicated robots, or stretching the limited understanding of the simpler ones.

As I mentioned before, my intention for writing this white paper is not to try to solve these issues myself, although I do have some ideas of how to make some progress. Rather, I throw these comments out to the broader mobile robot community for comments, suggestions, extensions, or completely different ways to view the interoperability challenge.

Sometimes the first step in such a discussion is to find an apt analogy, so I will end by drawing parallels between robot interoperability and self-driving cars. Autonomous vehicles must also share their operating space with a variety of different entities: human-driven cars, other autonomous cars and trucks, pedestrians, cyclists, etc. To officiate this space, we have strict constraints on vehicle movement embodied in lanes, traffic lights, speed limits, signage, and more. Warehouses are, at the present, less structured spaces than roads, but perhaps we need to build up the scaffolding of this type of infrastructure to make true warehouse interoperability a reality.

What do you think?